Menu
Log in
Register
Install the app
You are using an out of date browser. It may not display this or other websites correctly.
You should upgrade or use an alternative browser.

This relates to all small sixes

Status
Not open for further replies.

Staff member
VIP
Supporter 2021
Supporter 2019
REDLINE 10K
This is going to be an ongoing sticky as I have time to work on it so it will be edited so check back for the updates.

First off a stock Load O Matic (LOM) Distributor also needs to have a compatable or matching Carburator to work correctly. There are severial like the Holley 1904 & 1908, Autolite 1100 1101, and some of the 1940 Holley replacement carb's. This system is simple and works quite well when everthing is maintained, it's suitable for a totally stock early engine and for those that want to keep their cars or trucks all original. See below link for more info on the parts needed as well as how a LOM system works.

How to make a replacement for a damaged or missing vacuum line for the Holley 1904 and Autlite 1100. The Holley and some other Carb's that Ford used has a threaded port that the Vacuum line screws into. On these carb's a steel line is used with a compression type fitting, these fittings are the same as is used on a natural gas water heater pilot light. This is the compression fitting that fits the threaded hole in the Holley carb (see in link below). They should be available at many hardware stores or your local Auto parts or NAPA dealer too.

This above fitting are made for use with a 1/4 inch Steel or you could use a Aluminun line if you don't care about its originality, stock the Ford's & Mercury's used a steel line. If you have the old vacuum line for use as a pattern you can use a tubing bender or by bend the line hand to match the orginal bends in the old line. If you don't have a patern you will have to free form fit it to your engine. To install thread the compression fitting into the Vaccum Port and but leave it somewhat loose next push the 1/4 inch line into the compression fitting until it bottoms out then you tighten up the compression fitting. On many of the the LOM Distribitors the same compression fitting is used to connect to the stock vacuum canister so you may need to get two for a stock system. If you are going to use or already have a later Distribitor then run the line down near the Distribitor Advance canister and use a short piece of rubber hose to conect the Vaccum line to the Vacuum Advance. On some other carb's Ford used a flare fitting for the vacuum line conection into the carb in these cases a brake line of the right size can work or if you have use of a flaring tool you can also make a new line from scratch.

Mod's to the LOM

There are a few things that can be done to make the LOM system work a little better its a good system for a stock engine or where you need or want to keep it all original as in a Restoration project. First make sure the vacuum canister and the carb's SCV are in good working order. The MoPar electronic control box can be added for a hotter spark and better running and the points will last practically forever. The Pertonix Ignitor unit with a better (Hotter) coil too, is another way to eliminate the old points for a little less Maintance and better running.

Next weither you use a venturi vacuum or a ported vacuum source under power the engines vacuum is going to drop and with that the vacuum controled advance of the LOM, this is just the opposite of what is needed for a higher performance application. It's also why the later model Ford engines from some 1966 Calif. Emission models and all of them by 1968 the Ford Six engines used a distributor with both a mechanical advance for better power / performance and a vacuum advance system for best economy.This is the real drawback in the operation of the LOM's advance system and therefore it isn't very good for use in any type of a Hi Performance engine build up. So in my opinion a LOM should only be used for a totally stock restoration, since there are much better units available for a performance build up and you will then need to ditch the LOM to get a better Distribitor with a mechanical advance. This was also a first step mod even back when these engines were still relatively new. Back then there were dual point distributor's with mechanical advance only (by Mallory, Accel, etc.) to solve this problem and sometimes you can still find these Mallory (or some of the others) duel points distribitors used or even NOS. Today there are even better choices like Fords electronic DuraSpark I & II, or the HEI types, and the even a Robert Boch unit from Australia.

This swap has already been done by a number of the site members so it's not just a theory it's done with basic machine shop practices. I don't know how hard it is to find a competent machineist in your locale area though, but I was doing this type machine shop work in the mid 1960's back in high school, so it's not all that hard to do.

A new Melling M 65 5/16 inch drive oil pump that also comes with a new 5/16 inch oil pump drive shaft is about $75.00 this is usually a normal replacement item anyway during a engine rebuild, a rebuilt DuraSpark II can range from $50.00 to $90.00. I used to source a complete used DSII system in good useable condition (distributor, plug wires, coil, wire harness, ICM) from the local Pick A Part cheap $25.00 to $35.00. You could get a calabrated DSII for about $230.00 but you should contact Bill "WsaIII" direct to verify what the current cost is.

Also it is a fact that the Australian Ford small sixes for many years used a hybrid distributor that was a combo of the early 1/4 inch drive distributor block hole, with the ID shaft size that used a 5/16 inch hex drive broached socket in the distribitor shaft plus the M 65 type oil pump with the 5/16 inch oil pump drive shaft. This would be the least amount of work with no machining required to your early block.

For an engine that's going to be apart for rebuilding anyway I think this idea of the OP is excellent (see below link) and having a little back ground in machining in my OPIN it should be a fairly easy job.

DUI or HEI Clones
The DUI Distribitors makes special 1/4 inch drive distribtor for "Vintage Inlines" this is an easy drop in swap for the 1960 to 1964 144, the 1961 to 1964 170, and the 1963 1/2 to 1964 1/2 200 six'es. There one main thing that can make this distributor unusable first is if you have a factory power steering system or plan on adding one in the future then the DUI or also the many budget HEI clones being made are too tall to clear the engine mounted power steering pump.

"First; It is way to expensive.

Second; The HEI including the DUI are not ideal for the Ford 300 six or any other engine that spends most of it's time operating at low rpm.
At low rpm the dwell time is very long and HEI module spends the majority of it's time in current regulation mode and the coil spends a long time in saturation.
The wasted energy during this period has to be dissipated in the form of heat so both the module and the coil run hot decreasing spark energy and shortening both module and coil life.
At high rpm the dwell time is short enough to keep the module out of current regulation and the coil out of saturation. Life is good again but the 300 six doesn't live at that rpm level.

The 1965 to 1967 170 and the 1965 to 1967 200 engines with a Load O Matic Distribitor.
With these engine blocks a later Distribitor is no brainier being a direct or drop in swap! All the USA blocks made in 1965 and up will have the improved factory machineing to fit a better later model Duel Advance Point, DuraSpark, HEI, DUI, or most other common aftermarket Distribitors and they use the 5/16 oil pump drive shafts.

I also remembered to add this post about the new Tech way you could do this using your old LOM Distributor. The distributor advance gets locked out and you use the CB Performance Black Box that you can program the timing cruve into. Quick and easy to install then conect up your lap top and start programming. 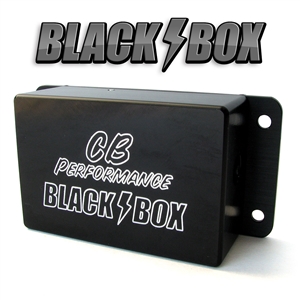 Ported Distribitor Vacuum vs Manifold Vacuum
The truth is both ways can work and ultimately its your choice as to what works best for you. The reason I like and recommend a ported Distribitor vacuum over direct manifold vacuum is how the car operates when the car is idling so let's look at pro's and cons of the two ways that it will work.

1. With the ported distritor vacuum at idle rpm there isn't any vacuum advance so you engine only uses the base ignistion timing and the idle rpm remains lower. This is great for an automatic trans car with less wear and tear on the trans and driveline parts when you put it in gear or you are waiting at a stop light etc.

2. With the manifold vacuum hooked to the distribtor vacuum advance you have the very high manifold vacuum that then advances the Distribitor timing and along with it raises your idle rpm much higher. With a stick (standard) type trans this isn't as much of a problem however you will still get some drivability issues and it takes some tuning workarounds to get it to function decently. This is why I don't recommend it to most people for a street driven car, or a beginner to the car hobby as often they aren't going to know what's needed to make it run well.

Other SCV carb's can be modded for ported Vacuum too and if you should want to have these Mod's done for you then contact Wsa111 about his services, or you can PM me for help.

By the way Champion Carburetors has a new replacement carb this is an updated copy of the Holley 1904 that can also be used to replace a 1908, the Holley 1940 or an Autolite 1100. these are brand new carb's that don't have the SCV on them but they can be used both for a stock LOD system or a newer Distribitor (see below link) also you can check with Vintage Inlines for this carb.

There has also been a couple new bolt on EFI Systems by Holley the Sniper 1100 1V that bolts right on to the Ford stock small block Log Heads.

Are you tired of struggling with the old Autolite model 1100 series carburetor on your classic Ford? Does your street cruiser currently hesitate at extreme temperatures? The team at Holley has designed the perfect solution for your problems. The Sniper EFI replacement throttle body for Autolite...
www.holley.com

There is also their 2V version the Sniper 2300 for those putting out more power.

Hope this has been of some help for those of you that are using these early engines. If you have any other questions about this you can make a post or drop me a PM. Good luck in your Performance goals.

Status
Not open for further replies.